In the days after the 2016 U.S. Election I was listening to a call-in talk-radio show.  There was one caller that I have never forgotten.  He was distraught about the results and suggested that what we need is another Constitutional Convention, because the one we have clearly isn’t working.  At the time I thought it was a pretty far-fetched idea.  But as the months go by the idea keeps coming back to me.  The foundations of our system of government are shaking.  Our elected leaders are no longer even pretending to work for us.  Maybe a new Constitution isn’t such a bad idea.  Maybe we need to start over.

As a collective, we in the United States are emerging from a long, foggy stupor of complacency.   As more and more corruption is exposed, we see that things have gone way too far.  I’ve been thinking back to that idea about a new Constitutional Convention.  What seemed like hyperbole two years ago sounds more plausible now.  What if we dare to imagine how things would be if we could have everything we want as a country?  What if we, as a collective, put everything on the table? 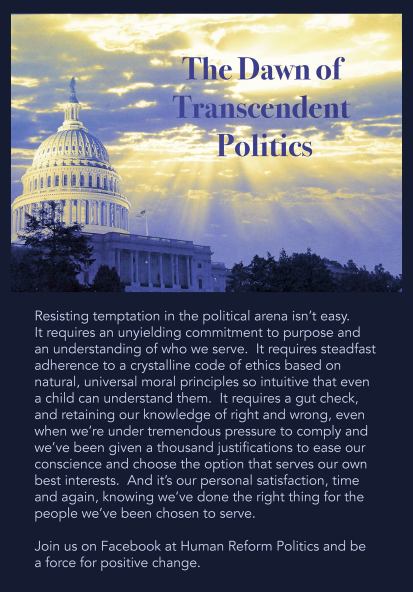 Each person’s vision would probably be different.  It would take intention, action, compromise, and time.  No one person would get exactly what they wanted, but I would be willing to bet that the result would a more just, fair, and peaceful country.  A country that lives up to its ideals, and one that we could all be proud of.

Let’s all step back from the day-to-day drama playing out in the news and take the time to think about who we are as a country and who we want to be.  I’d like to see us start by getting back to basics and doing things because they are the right thing to do.  Jeff Kurtz at Human Reform Politics on Facebook articulates this beautifully.

…steadfast adherence to a crystalline code of ethics based on natural, universal moral principles so intuitive that even a child can understand them.

Before we talk about policies, let’s reevaluate our principles.  It may seem like an insurmountable task, to get everyone operating for the common good, but we cannot let the size of the task stop us.  Each person can do their part.  First, by personally always doing the right thing for the right reason.  And second, by demanding the same from our elected leaders.  Collectively we have more power than we have been led to believe.

Never doubt that a small group of thoughtful, committed citizens can change the world; indeed, it’s the only thing that ever has.   ~Margaret Mead

One thought on “Principles”